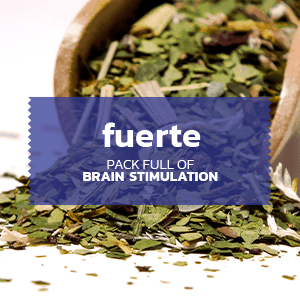 The Verde Mate Green family already has over 20 flavor variations and is still expanding with new products. One of the latest products of the Brazilian company is Verde Mate Green Fuerte. The unique, fruit and herbal composition contains 8 natural ingredients constituting almost 20% of the mix. This is the richest and one of the most original blends on the market!

Verde Mate Green Fuerte. You’ve never tried anything like it before!

Green yerba mate from the Parana state is characterized by freshness and subdued character. All thanks to the original drying methods based on the use of hot air instead of smoke. The finished raw material is perfectly combined with fruit and herbal additives, as evidenced by a number of popular brand flavor variations based on natural ingredients. Verde Mate Green Fuerte is the newest and the richest of them all! The whole is about 81% mate tea, the rest, which is almost 20% (almost 100 grams!), are herbs and fruit. No other yerba, not even from the green Verde Mate family, can boast of such a wealth of ingredients!

Herbs, fruits and green yerba mate in a rich combination!

What are our impressions of Verde Mate Green Fuerte? Right after opening the package, the most noticeable is the subtle scent of fruit known from European gardens. This is due to the addition of blackcurrant and chokeberry. The whole is accompanied by a delicate sweetness of guarana and freshness of mint. After adding water, the next elements of the mix “activate”. Lemongrass introduces a bit of sour character, perfectly complementing refreshing mint accents. If only because of it, it is worth letting the infusion brew a little longer. It shows its qualities best after about 8-10 minutes. Slightly in the background, but still noticeable are less expressive ingredients such as delicately spicy marigold and ginkgo biloba. Perhaps it is not easy to sense their character in such a rich mix. But believe us, the whole thing would not be the same without them! It is worth mentioning that the mentioned ginkgo biloba is a valuable supplement for the body. The essential oils and glycosides contained in the plant can strengthen the peripheral and cerebral circulation, which improves memory and concentration. That is why the sticker on the newest Verde Mate has the slogan “pack full of brain stimulation”.

Who do we recommend to try Verde Mate Green Fuerte?

The great advantage of most Verde Mate Green variations is the abundance of ingredients, while maintaining the harmonious and relatively gentle character of the whole. It is no different with Verde Mate Green Fuerte. It is difficult to classify it as a product for beginners or advanced, fans of herbal mixes or fruit yerba mate. It ranks somewhere in the middle, which is why it should appeal to various groups of mate tea fans. Provided, of course, that they are not only interested in traditional mate without any additives. So we have nothing else to do but to highly recommend the latest Verde Mate variation. You simply have to try it!